Life unfolds frame by frame as a movie does. Like has its rhythm and you can’t make it go faster or slower. There are 24 hours in a day, 60 minutes to the hour and 60 sixty seconds to the minute. Second by second life ticks by and the only thing of value is each second which is never to return to be experienced again.

Many people approach life like a boxing match, and they have a conflict on their mind 24/7. They see the world as a zero sum gain. If they win someone loses, and if someone else wins, they lose.

Others see life as Oneness and that Oneness as ever expanding with no limits to its growth. These people approach life with a “sharing is caring” attitude, and they appear to be much happier people then our conflict zero sum gain people.

In essence, I am describing people coming from soul based Love and the other people as fear-based egoists.

Ego-based people take themselves very seriously and believe that they are right and that other person is wrong. What is right and what is wrong has more to do with the morals of a society at any given time then the facts at stake.

In times gone by, it was morally right to burn witches at stake, put criminals in stocks in the town square, chop off the hands of thieves, crucify wrongdoers and so on. As societies change and supposedly become more humane, these actions are seen as barbaric. But what of Second World war Nazi Concentration Camps and Hiroshima and Nagasaki in 1945 being atomic bombed to smithereens. What of the numerous world destroying bombs held by various countries around the world as the ultimate threat to wipe out a nation, or part of one, off the face of the earth?

What about the drones operating in the safety of one country and killing people half the world away with their tactical and precision bombing?

Where does such a world end up?

As Gandhi said, “an eye for an eye and soon the whole world is blind.”

It’s time we decided individually to touch the world around us lightly as we would touch a lover. Put away the bludgeoning weapons and take out the kid gloves and touch the world lightly.

Whatever you decide to do will have a minimal impact on 7 billion people. It will only affect you primarily, and your family, friends and even your perceived enemies. Your choice to use a weapon or a kid glove is how you will see your place in the world and how the world will counter you with fear, anger, hate if you use a weapon and love if you use a kid glove to touch the world lightly.

It all boils down to coming from your ego or your soul, arising from fear or love. The Law of Attraction states unequivocally like attracts like. Fear will bring fear and love will bring love in their wake as the Law of Cause and Effect, or Karma plays out.

Touch the world lightly with love in your heart and feel its light and loving touchback.

It is as simple as that!

And the seconds of the world tick by never to return. Make your seconds count by touching the world lightly with love. 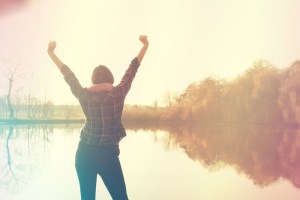